Spike is an Israeli fire-and-forget anti-tank guided missile and anti-personnel missile with a tandem-charge HEAT warhead, currently in its fifth-generation. It was developed and designed by the Israeli company Rafael Advanced Defense Systems. It is available in man-portable, vehicle-launched, boat and helicopter-launched variants.

In Europe the Spike is being produced and marketed through the German company Eurospike gmbh, that is partly owned by Rafael. European designation: STN Atlas Eurospike.

Spike missiles were exported among others to military forces in Australia, Brazil, Colombia, India, and many more.

Spike NLOS is a multi-purpose, electro-optical missile system. It has a real-time wireless data link for ranges up to 25km. The Spike NLOS weapon system is a member of the Spike family. It can be supplied with various warheads (heat, fragmentation, PBF). Can be installed on a variety of air, land and naval platforms.

The Spike NLOS is capable of being used during the day and night, and like the previous versions the launching systems works as a fire-and forget, enabling independent homing after launch without operator interference. The missile is able to update data while it’s flying in the air, on its way to its destination, using fiber optics.

In 2011 it also became known that in a highly unusual move, the British Army was hastily equipped with the missile, drawn directly from Israeli Army inventory after being exposed to increasing insurgent attacks in Iraq and Afghanistan beginning in 2007 with three variants of the NLOS being procured.[1]

In a deal concluded on 6 September 2011, the South Korean government had agreed to purchase an unknown number of Spike NLOS missiles.[2]

In 2020 the US Army announced its intention to procure Spike NLOS missiles to be mounted on Apache helicopters.[3]

In 2020 Spike NLOS missiles were reportedly used by Azerbaijan against Armenian forces in Nagorno-Karabakh.[4] 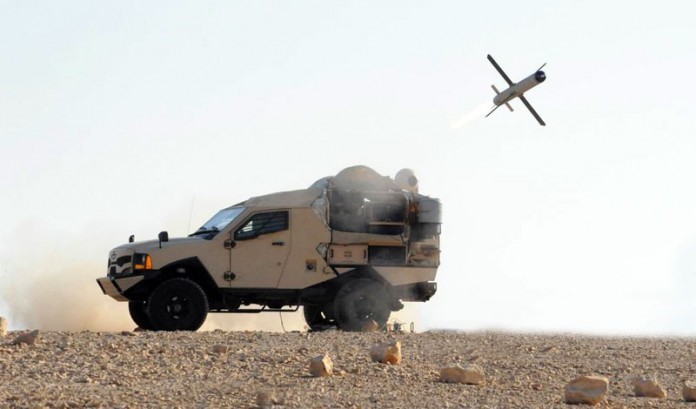 Spike missile launched from an armored vehicle. Photo by: Rafael

Operational in different variations since 1981 in the Israeli Army. Is being operated by the Air Force, Artillery brigades, Infantry brigades and the Navy. Was used during the second Intifada, Second Lebanon war, operations in Gaza: Cast Lead, Protective Edge, Guardian of the walls. Was also used against Iranian and Hizbollah forces in Syria.

The usage of the Spike missile by Israeli forces was kept in secret until the 2000s.[5] One of the most extensive usages of Spike missiles was in the second Lebanon war, with more than 600 Spike missiles being shot.[6]

In another report from from 2014, HRW claimed that 3rd of August 2014, “an apparent Israeli Spike guided missile hit directly outside a UN-run boys’ school in Rafah, killing 12 people, including 8 children, and wounding at least 25. About 3,000 people were taking shelter in the school at the time.”[8]

In 2015 the Israeli army IDF confirmed the existence of ‘Pereh,’ a mobile anti-tank guided Spike missile launcher camouflaged as an M60 Patton that was in Israeli military service for 30 years.[11]

In 2018, the ministry of defence announced that Spike missiles will be installed on the turrets of Eitan and Namer models of APCs and can be operated from within the vehicle.[12]

In May 2021, Spike missiles were used by Israeli ground and naval forces in many occasions in Israel’s operation “Guardian of the Walls” in Gaza.[13]  A video that was published by the Israeli Army reportedly shows the use of a Spike missile, launched from the sea on a target in Gaza.[14]

The Harpy is a loitering munition, or “suicide drone” produced by Israel Aerospace Industries (IAI). The Harpy is designed to attack radar systems and carries a high explosive warhead. In 2004, when Harpys sold to China in 1995 were to be upgraded in Israel in 2004, the USA demanded Israel seize them, after they were spotted in a Chinese military drill in 2002, though Israel claimed the Harpys had no US components, and therefor the US had no claim on them. Eventually Israel didn’t upgrade the drones, but did return them to China.

The Harop, first sold in 2005 to Turkey, is a later development of the Harpy. It can operate both fully autonomously, or be manually operated in its human-in-the-loop mode. If a target is not engaged, the drone can return and land itself back at base. In both 2016 and 2020, the Harop was by Azerbaijan in the Nagorno-Karabakh conflict.

While the Harop is in operational use by the Israeli Navy, we do not know of any use of it in combat by Israel to date.

Israel exports arms and military equipment to around 130 countries worldwide. Currently the database contains 48 countries and will continue to be updated regularly.

The American Friends Service Committee (AFSC) does not assume any legal liability or responsibility for outdated, incorrect, or incomplete information included on this website.